Neither the Taylors nor Mr. Baines will be joining us next week. Anyone else can’t make it, please let me know. Filling our ranks will Mr. Dave Sapery for the first time this season and JasonWolin again. Could use a couple of more players, so if you want to invite someone not on my normal guest list, give me a heads up.

Next game will be our 10th game of the season, so all of you members who have come at least 8 times, will need to add another $60 to year end pot. Once again, this is the last game to use the rebuy mulligan, and the following players have not used theirs as of yet– JBen, MBen, Kobi, Jay, KidCatcher, Begs, Plank, William, Zahler and Medway. I wonder what songs Mr. Perlmutter has in store for you.

Not to be outshone by Mr. Perlmutter selfie2014.com website, JZ posted the picture below to Facebook over the weekend under the header “Mona Jeff”. Many of us saw it and found quite amusing, so I thought I share with group. One of Jeff’s friends described it perfectly – “It’s like Dr. Evil and Mona Lisa had a baby.” 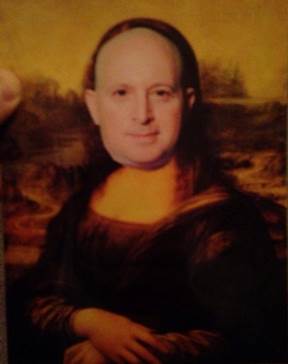 One of the best things about setting up this league has been getting to know and become friends with people I might not have otherwise. One such person for me is our fan favorite and Karaoke Master David Perlmutter. Dave’s sense of humor is advanced and contagious, and he one of the nicest and most charitable guys I have had the pleasure to meet (which maybe doesn’t say a lot of about the people I know). So I figured, since this is the last game to use your karaoke mulligan, why not name this game in Dave’s honor. Another reason to do this, as evidenced by his one-a-day selfie website (http://selfie2014.com), Dave might be insane and I think it is best we all try to keep on his good side.

Next game is April 10th 7:30pm start time with Mr. Goldbaum on snack duty. Please let me know if you cannot make it. Also think, Trump will be back to normal dress code rules, so watch the jeans.

The following players have not used their rebuy mulligan – JBen, MBen, Kobi, Jay, KidCatcher, Begs, Plank, William, Zahler and Medway. Last game to use so guessing this game could be a wild one with a record amount of entrants.

Though I thoroughly enjoyed Dave’s selection of music, can’t say he did the greatest job enforcing the Karaoke rules. But I think that is more a flaw in the rebuy rules. Speaking from experience, the last thing one wants to do, after being beat and shelling out more dough, is to serenade a bunch of assholes in song. So for next year, I think we switch it around. If a person gets knocked out and wants to rebuy, the player who just took their chips will be the one to serenade the group. I think John Rawls would like that approach better (sorry for the Rawls reference, but I have to use my liberal arts education somehow).

Could be a new sheriff in town. Jeff Another-berg took first place and after I update website, guessing he just catapulted to the top of the league standings. William, who had planned to seranade us to rappers delight, actually avoided a rebuy and took second. Mr. Kadlec took third for the second time in a row, with RFG and guest Dan Schorr rounding out field.

Congratulations to top finishers and thanks to Rob Another-berg for snack. Below is some color on the night from Jeff and will update website as soon as I can.

Brief color – table was playing pretty tight. We went through almost 2 blind levels to get from 9 down to 8. After being at the table for a while, Jason (in short stacked 6th place) tried to propose a deal that 6th place would get their money back. That was shot down very quickly. RFG had a large stack that got whittled away after folding various weak aces to the persistent all in shoves around the table. When we were down to 4, blinds at 3k-6k, Kadlec was the big blind with only 8k total, RFG shoved with QJ, Kadlec actually folded (leaving himself with 2k), and I woke up with QQ. RFG was a bit disgusted that Kadlec wasn’t even in the pot and then saw that he was dominated. Kadlec busted out next hand and William and I were heads up. Not sure if William had played a hand since there were 2 tables. I had a bit of a chip lead but he took some from me. When he had the chip lead 100k to 80k, he pushed with 8-8 and I called with A-6. The flop came A-6-rag and that crippled William. The very next hand I get dealt QQ again and the chips are all in. William turns over A-8 or something close and and ace hits the flop and he chips up to 40k. I think it was over on the next hand as my K5 held up against his Jack or Queen high.
1